How To Care For Your Body Like An Olympian

If you followed the swimming events of the Olympics this year, you may have seen several events won by American swimmer, Michael Phelps. Mr. Phelps has won 23 gold medals in his Olympic career, making him the most decorated Olympian in history. Seeing him win Gold in the mens 200-meter butterfly is nothing new. However, this year, you may have wondered about the little red bruise marks appearing all over Mr. Phelps’ shoulders and back.

Don’t be alarmed, this isn’t some deadly skin disease. It is actually a fairly common therapeutic technique called cupping. 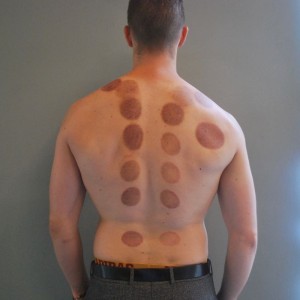 While traditional cupping has its roots planted firmly in eastern medicine techniques, it is widely used today by massage therapists, acupuncturists, and chiropractic doctors who wield it as a joint mobilization and muscle manipulation tool. It is also an effective way to bring blood flow to specific areas of the body: The suction “cup” is applied to a highly restricted area of soft tissue in the body. The cup is suctioned to the skin by a pump or a by a flame (used to create a vacuum on the inside of the cup) and is used to basically pull tissue up inside the cup. Even though the treatment is only for a few minutes, the suction pulls blood from capillaries located beneath the surface of the skin, creating a small, round bruise. The therapy can consist of leaving single, or multiple, cups in a general area of the body while the therapist manually manipulates the nearby muscles and joints with stretching or massage. The benefit comes from the cups holding the tissue taut, thereby allowing skin to be pulled away from muscle, or allowing muscles to be pulled and stretched by the suction that the cups create. This sounds extremely uncomfortable, but in actuality it provides relief and allows the targeted tissues to move across each other with better fluidity. There are many styles of cups, and many ways to use them. They are a great tool for athletes and the general population, to diversify the way they recover from exercise/sport and prevent injuries.

So, if cupping is so common in the practice of rehab and recovery, why is it only now being employed on our elite athletes? And why are we just now seeing it make its mark on the Olympic Games? Well, this year’s Chief Medical Officer for Team USA was chiropractic doctor, William Moreau! Dr. Moreau is also the managing director of sports medicine for the United States Olympic Committee, and previously served as Medical Director for Team USA in the 2012 London Games. Why a chiropractor, you ask? Most individuals who have received Chiropractic care, already know the answer. The medical community is finding that Sports Medicine care from chiropractors helps to maximize health and maintain peak performance — and not just in athletes — but in all populations.

The chiropractic influence seen in athletes this year was’t just limited to the cupping technique. The USA athletes of the 2016 Rio Olympics were treated by chiropractors and massage therapists with techniques such as laser therapy, active release technique, and kinesio taping. Here is a brief description of each technique, so that you can be better informed of the treatments used on our athletes this year. You can sure bet it’s not the same treatment they were receiving even just a few years ago. Each of these services are offered in our clinic.

Laser light therapy is used for stimulating the body’s natural healing process after an injury. It works by increasing oxygenation in damaged tissues by inducing hemoglobin (the oxygen carrying molecule in red blood cells) to drop off faster and more frequently wherever the laser is applied. It simultaneously increases energy in the form of adenosine triphosphate (ATP) production in damaged tissues by speeding up the cellular mechanisms that make energy. This means that laser therapy can be used in nearly any scenario to help speed up the healing process. A more indepth look at laser therapy can be found in our blog post on the benefits of laser treatment. See more.

The Active Release Technique (ART) is a manual therapy that has long been used by chiropractic physicians and other musculoskeletal healthcare professionals to manipulate and mobilize the body’s soft tissues. Painful and tight areas of the body are identified and corrected using pressure from the hand or thumb of the facilitating health professional, along with specific movements that the patient or athlete and the health professional perform. This therapy has been shown to be extremely effective in treating people who are suffering from injuries that are associated with muscular tightness and joint immobility. A more in depth look at ART and how it can help you, can be found in our blog post on the benefits of ART. See more.

Kinesiology taping is a type of therapy that utilizes cotton/nylon tape that adheres to the skin and is placed in certain patterns across the body to help an athlete or patient in many different scenarios and for many different reasons. Kinesiology tape can be applied to decrease pain and inflammation in a specific area, while simultaneously, improving the posture and therefore general performance of the person receiving treatment.  By simply standing in correct posture, and applying the tape in certain areas on the body, it can serve as a gentle reminder throughout the day to keep your posture corrected, by gently pulling on the skin when you move out of a correct position. What is even better is that Kinesiology tape is designed to not come off in showers, during swimming, or from sweat. This makes it a perfect tool for our Olympic athletes or the general population. And allows the wearer to receive lasting (up to a week in several cases) benefit from a single taping. Yet again, we have an article for more info on taping right here! See more.

All of these therapies did great things for our USA Olympic team, as well as other athletes around the world who have adopted these techniques into their training programs. However new these therapies may be to the Olympic community, we at Hosmer Chiropractic Health use these tools on a daily basis with our patients. A testament to the success of these therapies, and their ability to treat a wide variety of ailments, can be heard not just from a decorated Olympic athlete like Michael Phelps, but from any one of the wide range of individuals receiving treatment at our clinic. While the Olympics have been great for spreading awareness of treatment options, it is important to remember that our Olympic athletes are humans, just like us, who have the same ailments that many of the people reading this post probably have. There is no reason why the success of these treatments should be limited to our elite athletes. Come in and see what it can do for you and your condition.

We look forward to seeing you, and helping you to feel better. We also sincerely hope you enjoyed this year’s Olympic Games, go team USA!